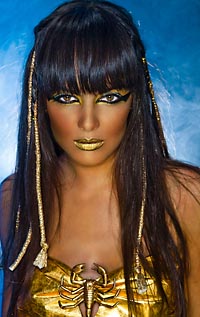 Cleopatra VII, one of the most revered female rulers in history, ascended to power at the age of 18 and is probably better known for her affairs of the heart than her acumen at handling political affairs. Cleopatra was born in Alexandria, Egypt in 69 BC to the reigning pharaoh Ptolemy XII. Ptolemy, an inept leader, was soon exiled to Rome and control of the Egyptian empire was shifted to Cleopatra's older sister Berenice.

When Ptolemy XII returned to Egypt some years later to reclaim his crown he had his daughter Berenice beheaded and her husband executed. At the time of Ptolemy XII's death in 51 BC, Cleopatra was the eldest surviving child and became Queen of Egypt. Cleopatra shared the throne with Ptolemy XIII, her 12 year old brother.

The only known image of Cleopatra from the Temple of Hathor in Egypt, with her son by Julius Caesar, Caesarion.

Ptolemy XIII was not only Cleopatra's brother but also her husband, a practice not uncommon in the Egyptian culture at that time. After three years Ptolemy managed to gain control of Egypt, forcing Cleopatra to flee to Syria with her sister Arsinoe. In a misguided attempt to impress Julius Caesar, Ptolemy had Roman general Pompey executed--not realizing that Pompey and Caesar were friends.

Aligning herself with Julius Caesar and winning favor by becoming his lover, Cleopatra soon regained control of the Egyptian throne. Both Caesar and Cleopatra were married to others but that did not stop them from an affair that reached scandalous proportions and culminated with the birth of a son called Caesarion (Little Caesar).

Cleopatra spent most of her time in Rome with Caesar, but upon his assassination in 44 BC she returned to Egypt with Caesarion and resumed her role as Queen. Caesar's death brought war to Rome and power was eventually split between three men. One of these men was named Marcus Antonius, called Mark Antony.

When Cleopatra was summoned by Mark Antony to discuss boundaries, he too fell victim to her charms. Antony was a married man, but he left his wife in 37 BC and pursued the Egyptian queen. They married the following year and had three children together, Ptolemy Phildelphus, and twins Alexander Helios and Cleopatra Selene. Mark Antony's behavior outraged his fellow Roman countrymen. When Antony then ordained his children with Cleopatra as kings and queens of neighboring countries, it was all the Roman Emperor Octavius could bear and he declared war on Egypt.

Knowing that the Egyptian army was no match for the mighty Roman Empire, Cleopatra began to prepare for the inevitable. With the Roman army at the doorstep, and believing Cleopatra to be dead Antony attempted suicide but failed. They were later reunited but he died in her arms.

Cleopatra and her children were taken prisoner by the Roman army in 30 BC. Cleopatra was allowed restricted freedom, but was under constant surveillance by Roman guards. Fearing punishment and humiliation at the hands of Emperor Octavius, the Egyptian queen took her own life. Legend has it that Cleopatra had an asp, a highly venomous snake, smuggled to her and allowed it to sink it's fangs into her arm. She was 39 years old.

Cleopatra was the last pharaoh of Egypt, and after her death Egypt became a province of Rome. Cleopatra's rule spanned a mere 21 years but she managed to become one of the most infamous and interesting characters in ancient history.