Enduring Symbol of Rebirth and Regeneration

The Egyptian dung beetle (Scarabeus sacer) is one of the most recurrent symbols throughout Egyptian artwork and hieroglyphics and had enormous significance in Egyptian mythology. It can be found on jewelry, amulets, belts, incorporated into coffins and murals, and on it's own in the form of carvings out of just about every material available to Egyptians. It was worn in amulets and used as a healing symbol in magical and healing rituals. The Scarab Beetle offered by Zarifa's is a cold cast resin replica of this ancient artifact. 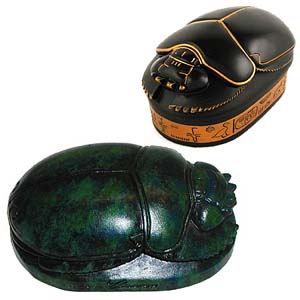 The Egyptian dung beetle lays it's eggs in a small ball of dung, often several times its own weight and size. After laying the eggs it pushes this ball wherever it goes. It was this behavior that led the ancient Egyptians to believe that the dung beetle was an earthly representation of the Egyptian god Khepri, who pushed the morning sun out of the darkness, into our world, and across the sky.

Ancient Egyptians believed that life as we know it sprung from the Mound of Creation which rose out of the ocean and chaos of the universe. It's no accident that a mound of dung is symbolic of this great mound from which all life sprung forth. When the scarab beetle hatchlings were seen emerging from the dung mound, it was believed they were capable of spontaneous creation, a gift from the gods.

The ancient Egyptian word Khepri translates to "coming into being" or "who brings into being." Because it was believed the scarab beetle was capable of spontaneous creation without mating like other creatures of the earth, it became the symbol of regeneration and renewal, an important power to have in the trip through the underworld.

In most theologies there are believed to be four elemental forces in the universe, Earth, Fire, Air, and Water, and the perfect embodiment of their combination, often called the Quintessence. Egyptian mythology is no different: these are Ta, Am, As, Nu, and Sa, represented by the four sons of Heru (Horus) - Imsety, Daumutef, Qebsenuf, and Hapi. Khepri, symbolized by the Egyptian scarab beetle, is the embodiment of the fifth element, Sa, the quintessence and symbol of never-ending regeneration and renewal.

This power of regeneration becomes even more important as an Egyptian prepares to pass from this life into the next.

The Ceremony of the Weighing of the Heart

Before an Egyptian was granted a place in the Afterlife, he or she must pass a rigorous test called the Weighing of the Heart. This trial took place before Osiris, god of the Underworld, and a tribunal of 42 deities. The Egyptian was asked to name each of the 42 deities and swear against committing any offenses against each of them. During this trial the ancient Egyptian's heart was placed on one side of a scale, with a feather, the symbol of Truth and Justice (Maat) on the other. If the heart balanced against the feather, the Egyptian would safely pass into the Afterlife. If their heart was heavy with offenses, the scale would drop and be consumed by the beast that waited next to the scales, Ammit ("the gobbler.") If this were to happen, there would be no perdition or hell, they would simply cease to exist. For ancient Egyptians, this was the most terrifying prospect possible.

In the Egyptian's life, this was probably the most important role of the carvings of scarab beetles: the "Heart Scarab." The heart was the only organ not removed from the body during mummification because it would be needed in the Weighing of the Heart. To prevent the heart from revealing any offenses against the gods, a sculpture of the scarab beetle with a prayer inscribed on the underside was placed over the mummified Egyptian's heart. Scarabs were also often painted and drawn onto the mummified wrappings.

Many of these carvings were sculpted of a green stone, possibly limestone or soapstone, similar to the replicas offered from our store. But these beautiful replicas are not accurate copies of Heart Scarabs, they are more similar to the message scarabs of Amenhotep III. 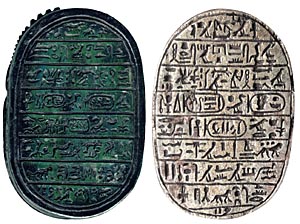 Circa 1380 BC, the enduring symbol of the Egyptian scarab beetle took on yet another important task. The Golden Age Pharaoh Amenhotep III began having his scribes carve his messages on the undersides of stone scarab sculptures. These became not only symbols of Khepri but of Pharaoh, probably one of the earliest royal seals.

The similarity to the Amenhotep III scarabs cannot be ignored. The manufacturer did not manage to get all the hieroglyphs on the reproduction, which of course changes the translation, but most of the symbols, including the royal cartouches, have been adequately reproduced. Although the scarab beetle sculptures offered by Zarifa's have a deep green marbled finish akin to Heart Scarabs, as you can see by the picture comparison above they are modeled after these ancient Egyptian message scarabs and are painted in the marbled green for a more attractive finish. According to the reference below, The original inscription lists the titles of the king and queen and reads: " The number of lions that his majesty killed with his own arrows from year 1 to Year 10: 102 wild lions." * As for the reproduction, the translation probably loses some of its meaning because hieroglyphics can be translated very differently depending on surrounding characters.