This year we had the opportunity to attend the East:Meets:West 2008 Belly Dance Showcase, an annual tribal and dark fusion belly dance event held in Portland, Oregon. The dance - or perhaps, a better description might be celebration - was held in the Mount Tabor Legacy in southeast Portland, an aging theatre house converted to a bar and dance hall. Upon entering the venue, 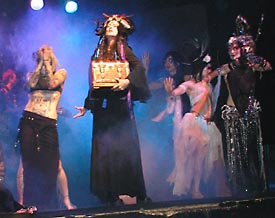 the ethereal and mysterious melodies of a bowed yayli tambur filled the air, a live performance by Portland's Azphodel. Dancers in costume scurried about here and there, adorned with full body tattoos, amazing head pieces, and body art, a preview of the evening that was to come.

Dressed in a formal tux and top hat, master of ceremonies Noah Mickens opened East:Meets:West with a dramatic preamble, accenting his voluminous oration with the animated style of a macabre character from a Tim Burton film, setting the stage for the events to follow.

The theme for the evening's show was Pandora's Promise. The first act was a breathtaking interpretation of the opening of the fabled Pandora's box, a collaborative piece that included dancers dressed either in all white or all black, angelic guardians, and several dancers from the show. In dramatic theatrical style, the first pixies gracefully entered the stage, sinuously winding their way down, carrying a bowl of burning sage, cleansing the atmosphere of negative spirits. Candle bearing sirens took their places to the left and right, highlighting the center of the stage where Pandora soon appeared, bearing the ominous box of lore. As the music pitched, she tore at the latches of the box and flung it open. The dancers responded, filled with the spirit of dance and mischief; some danced in raptured frenzy, others formed a flurry of hands, bearing Pandora's box up, up, and away into the gloom. As the music wound down and the ceremony came to a close, Pandora descended from the stage, removed her head dress, and offered it to the goddess figure at the altar in front of the stage. One by one, each of the dancing spirits dissolved into the dark from whence they came.

When the music faded, something amazing happened. Silence. For a full three seconds, there was not a sound, not a whisper. Someone snapped out of the trance and began the applause, and like a dam breaking loose, the rest of the audience followed in a roar.

We were in for something special this evening.

One by one, each of the performances demonstrated exactly that. Although most of the dances were expressions of tribal fusion, there was a wide collection of other dance styles as well, including everything from traditional dance and taqsim to burlesque to solo fire dances. Each act displayed obvious attention to detail in choreography, costume, and body art. The pictures included here speak for themselves. 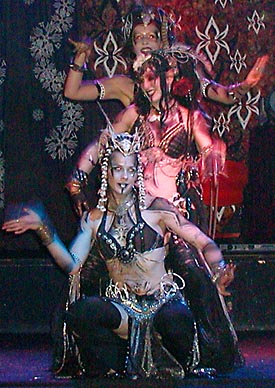 All of the acts were amazing throughout the evening, but we can't conclude this article without a mention of the closing act by Serpentine, who organizes the annual East:Meets:West Belly Dance Showcase. As the music begins, a dancer emerges from the audience bearing a flaming bowl overhead, and offers it upon the stage. Lucretia*Renee, Aradia, and NagaSita emerge from the darkness, one by one, each carrying a brass cauldron, reminiscent of the "threes" that pervade history. Are these the Bard's three witches? The Three Fates of Greek mythology? In any case the imagery is clear and effective; Serpentine has cast their spell and immediately holds us captive.

As the lights come up, their dance continues, transforming from slow, yoga-like movements to quick, calculated collaborative steps, each movement demonstrating the dedication and experience of their art. Near the end of their performance, they gather around the flaming bowl and each of them draws fire to the blossoms at the tips of spoked fire rings, one in each hand. The dance continues in a dazzling display of fire in motion.

The curtain call concluded with all the dancers descending from the stage, mingling with the audience and drawing them into the celebration of life through dance. We concluded our stay around 2 AM, but we're certain, as the MC said, the dancing continued until the break of dawn.

Belly Dance performances always guarantee a rewarding experience, with wide variations in style and costume; a touch of exotic and often erotic expression of dance and spirit, with each performer bringing something new and interesting to the stage. Tribal Fusion crosses the traditional boundaries of belly dance, mixing classic styles with a primal style that has been with humanity since the beginning of time to create something new, something that can't clearly be defined in a single genre or niche. The East:Meets:West Belly Dance Showcase brought Tribal Fusion to a new level, and we can only hope to attend next year.

Thank you to each of the performers of East Meets West 2008: